This brand new attraction was formally opened on 1st May 2017 by Roger Dilley. Roger is one of the illustrators of the Jack the Station Cat series of books and a good friend of the Railway.

The Grovehurst Dockside Miniature Railway runs parallel to the Saxon Shore Way and the Milton Creek fence-line at Kemsley Down. It’s station, Creekside, is located behind the Footplate Café, close to the pedestrian entrance to the Railway.

This isn’t the first 5-inch gauge ride-on railway at this location, there was one here before from the late-1990s through to the Railway’s temporary closure in 2008.

The locomotive, coaches and track are all new. The locomotive is to be named ‘Lil’ later in the season. The name has been chosen to commemorate Lil Chisman who was a long-time member of the Railway with her husband Keith. Sadly, Lil passed away recently but Keith still attends the Railway for a cup of tea and a chat.

The section that has opened represents three years of work and £4,000 investment by individual members. The Railway has not paid for this new attraction. It will, like the Railway, be operated by volunteers – if you are interested in helping, please email sales@sklr.net

The photographs below show the GDMR during construction and in operation 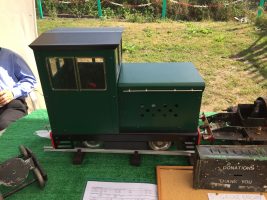 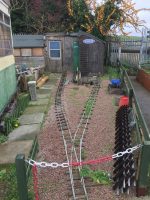 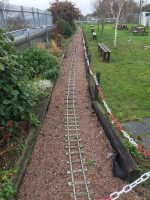 The line, Christmas 2016. It was found that the ballast was not stable enough to support the track with trains passing over it so a new solution was required

Due to a fault with the card machine, we are unable to take card payments…