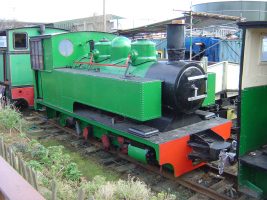 Alpha back in 2006, in the Museum Siding at Kemsley Down

Steam locomotive ‘Alpha’ was delivered to Kemsley Paper Mill in 1932 and has remained at the railway since.

Alpha was taken out of service in 1969 due to some faults but was never repaired. This now means that Alpha had become a static display. In 1977, Alpha was painted silver to celebrate Her Majesty The Queen’s Silver Jubilee while in a siding at Sittingbourne Viaduct station.

Alpha was then taken back to Kemsley Down and put into a siding on display.

In 2004, some volunteers had carried out some minor repairs and a repaint to make Alpha presentable and to make sure that nothing else would rust away.

In 2014, Alpha was put into the loco shed at Kemsley and the cosmetic restoration began. The bottom half of the cab back was replaced and the back of the cab has been painted up to undercoat. The top coat will be painted later on in the year. The drivers side of the cab is been prepared to be repainted just like the cab back. The firemens side of the cab had some metal work taken out due to not been able to repair and is awaiting for new metal to be replaced.

A small team of volunteers, most of the volunteers are young members, are carrying out the work on Alpha. To keep up with any work being carried out then please visit Alpha Facebook page, https://facebook.com/alpharestorationproject/, and please like and share her page to your friends and family as well. 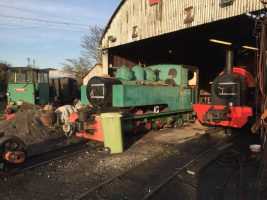 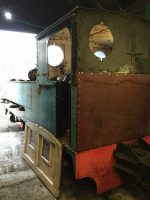