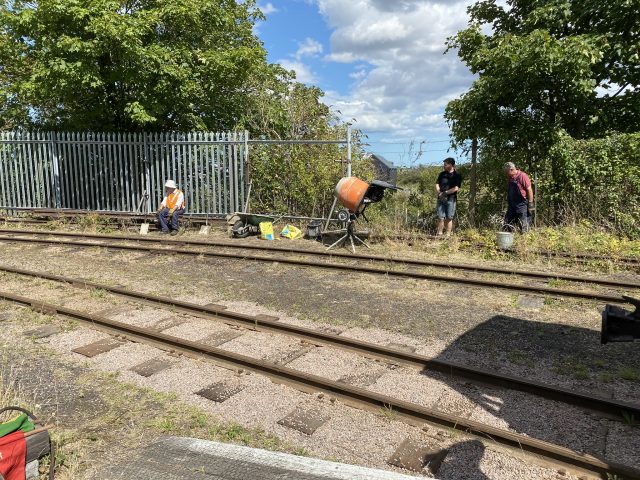 The Pway Gang taking a rest from fence erection at Sittingbourne Viaduct station. In the foreground you can see where they have previously replaced several sleepers.

The Permanent Way refers to the track, despite it’s name, it isn’t permanent and requires continuous maintenance and renewals. Our track gang is also known as ‘Destructions Inc.’

It’s not all about track either! They also make sure the bushes and overgrowth are trimmed back and during 2019 and 2020 they have erected palisade fencing at Sittingbourne Viaduct station.

Their work is very hands-on and physical and involves working anywhere along the track. They have been known to carry out sleeper changes in the snow on the Viaduct which is a pretty harsh environment to work in. You will get cold, wet and dirty but it is worth it when you see the trains passing over the newly relaid sleepers etc.

They generally work on Sundays and Wednesdays – to volunteer to work with them, please email info@sklr.net