History of the Line

The Sittingbourne & Kemsley Light Railway is the preserved southern half of the former Bowater’s Railway built to move the raw materials for paper making and also the finished products around the mill at Sittingbourne.

Edward Lloyd, the newspaper owner and publisher, built Sittingbourne Mill in 1867 to supply his empire with paper. The railway was originally horse drawn and was centred around the wharf on Milton Creek with lines into storage sheds and the mill. In 1905 the first steam traction arrived in the form of 2 Kerr Stuart ‘Brazil’ class locomotives – ‘Premier’ and ‘Leader’. The locomotive fleet grew and by the time of the system’s heyday there were 14 steam locomotives including 2 fireless engines, plus 1 diesel and 1 battery electric engine.

The mill at Sittingbourne relied heavily on raw materials being brought in by barge. Milton Creek had gradually been silting up and always had a white colour due to the amount of clay and other by products of the papermaking process that were discharged into the creek. By 1913 this, together with the need for a greater volume of raw materials, saw plans for the building of Ridham Dock and Tramway. Building of this was hindered by the First World War, but the tramway was completed by 1916 and the dock was finally finished by the end of the war. This included a viaduct which, although originally designed as a steel construction, was actually built in reinforced concrete. This viaduct is over ½ mile long and is still in use today, but over the last 10 years more than £100,000 has had to be invested on its repair.

The development of the mill at Sittingbourne was restricted by the Southern Railway on one side and the creek on the other. So in 1923 a new mill was built between Ridham and Sittingbourne at Kemsley. At the time this was the largest paper mill in Europe . The railway was eventually a 24 hour a day, 7 day a week operation which maintained a passenger service for mill employees. The ‘main line’ was 3½ miles long and there was more than 10 miles of track. There was also an internal standard gauge line that branched off the Sheerness line.

The company changed hands a number of times, passing from the Lloyd family in 1927 to the Berry family, and was finally purchased by the Bowater family in 1936. The Bowater Corporation was still in charge of the mills in 1965 when a study of internal transport was made which concluded that this would be better done by road transport. So in 1969 the railway was handed over to the Locomotive Club of Great Britain’s Light Railway Section which became the Sittingbourne & Kemsley Light Railway (SKLR).

Bowaters sold the mills in 1986 and they have changed hands on several occasions since then. In 2007 paper production ceased at Sittingbourne Mill and the railway was forced to cease operating. Following lengthy negotiations, the then owners, M-real, agreed a 125 year lease of about a mile of the track bed to the SKLR. However this stopped short of the Milton Regis (Asda) Halt and so it was impossible to operate a public train service.

The mill at Kemsley produces paper packaging to this day and is owned by D S Smith plc who also own the site of the SKLR station and workshops at Kemsley Down. Negotiations are taking place to agree a lease on this land.

In 2010 M-Real sold the Mill, the rest of the trackbed and the site of Sittingbourne Viaduct Station to Essential Land who have demolished the old mill. In December 2010 consultation took place with regards to their plans for the mill site. The Railway was able to operate services from Milton Regis (Asda) Halt to Kemsley Down in October 2010. Regular services recommenced in May 2011, but again between Milton Regis (Asda) Halt and Kemsley Down. The mill at Sittingbourne was demolished in 2010 and a Morrison’s Supermarket was built on part of the main mill site. A skateboard park is planned for part of the wharf site adjacent to the railway.

Sittingbourne Viaduct Station has suffered due to the demolition work and repeated vandalism and thefts of important track items. The station was reopened for public access in April 2012 and work is ongoing to secure the site and to develop disabled access and customer facilities. 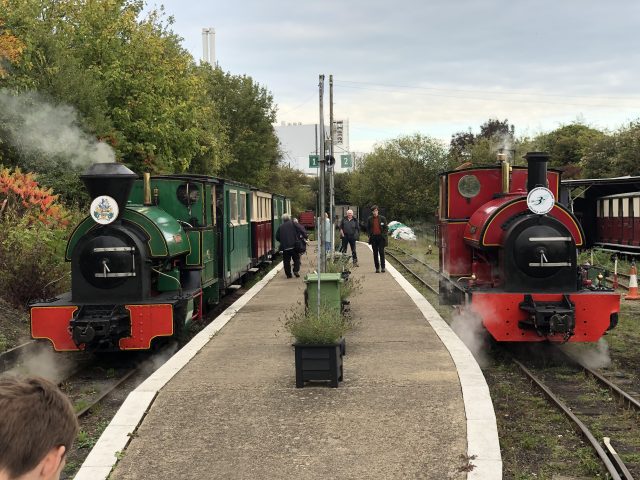 The Railway celebrated its Golden Anniversary of Handover in September/October 2019 and continues to celebrate into 2020 with the 50th anniversary of public trains.